At 1:00 PM on April 7, 2013 Marie Ring pedaled her 3 wheel unicycle out in front of the pitcher’s mound at Hadlock Field in Portland and made baseball history as she delivered the ceremonial ‘first pitch’ from her perch. It is believed that this is the first time a first pitch has ever been delivered in this manner- certainly at Hadlock!

It was a quiet weekend for Marie who won an exhibition tennis match on Friday, collected four medals as she led Mt. Ararat High School to 3rd place finish at the Science Olympiad on Saturday and made baseball history on Sunday. Marie also had her picture taken with former New York Yankees manager Stump Merrill. Stump was scouting for the Yankees (the Sea Dogs were playing Trenton, which is the Yankees AA team) Stump also has 2 grand-daughters- Lainie and Ella, who rode with the Woodside One Wheelers.

The rest of the WOW team also performed on this cold and blustery day. The opened with a dazzling performance on the pavilion outside the park before the game and then inside the park showing a variety of their skills including the bunny hop, three-wheelers, ultimate wheelers (they have no seats), giraffes and kangaroo-style pedals. The crowd was amazed by their juggling skills- inviting a few to give it a try.

It was another fantastic performance by these amazing athletes! 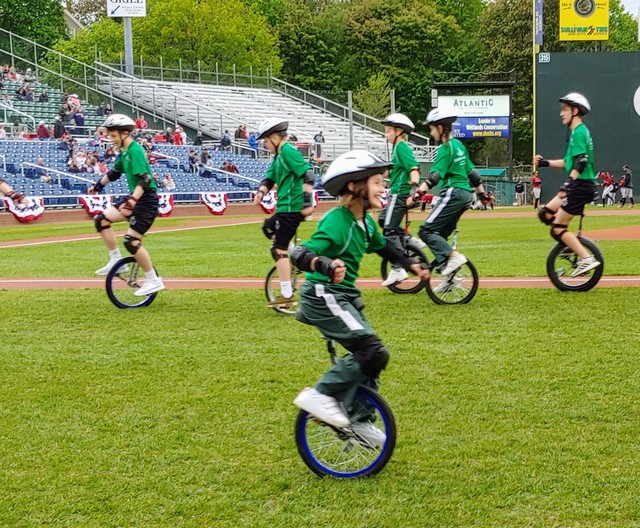 From the Medill School of Journalism

WASHINGTON — The Woodside One Wheelers turned heads at the Independence Day Parade this week. The group of more than 30 riders made their way down Constitution Avenue as they balanced on one, two and even three wheels. Some of the riders also juggled. The group came all the way from Maine.